For nearly a century, black men’s and women’s hair has been a political declaration, a cultural statement, a social media moment – and sometimes all three.

Think Angela Davis, fist raised at a 1960s Black Panther rally; Pam Grier, “the baddest one-chick hit-squad” in the 1970s movie Coffy; Erykah Badu looking skyward on the cover of her 2003 album Worldwide Underground, Solange Knowles holding court in a white cape at her 2014 wedding, and, most recently, Lineisy Montero being named fashion’s breakout model of the year.

Afro hair has been the stuff of books, university courses and documentaries, its history too long and heady to be expounded here. But as the sight of black hair in its unpermed, unstraightened state becomes ever more common in fashion and the media, one thing has become clear: it’s time to stop making black hair a thing.

I say this after Taraji P Henson – the actor who plays Cookie Lyon in Empire, the hip-hop answer to Dynasty – made headlines for choosing to pose for a magazine without a wig or weave, instead opting for the cornrows she typically wears underneath them. Really?

Henson rightfully deserves a round of applause for celebrating and showing off her natural beauty, but we don’t need to dissect it every time a woman chooses to do so. 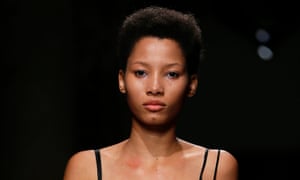 The power of the natural hair movement lies in the fact that black women the world over are rejecting the damaging chemicals of hair-straightening perms and embracing the natural beauty of their kinks and curls. When Bruce Weber saw her intricately braided hair and suggested he shoot her like that, Henson told CR Fashion Book: “Part of me was like, ‘No, no, no, NO!’ This is the hair no one is supposed to see. This is like behind-closed-doors hair. I feel naked. I feel like a plucked chicken … or a wet one. A baby chicken! But Bruce says to me: ‘It’s not about the hair, it’s your face.’”

When she posted an image from the shoot on Instagram, she wrote: “I decided not to block art and just let it be free.”

“Let it be free” are the key words here. In the same way that curls look best when they haven’t been weighed down with too much product, the natural hair movement has its biggest impact when it’s simply able to exist without any qualifiers.

In his latest book, Between the World and Me, the much-lauded cultural critic Ta-Nehisi Coates described the changes the world has seen from his childhood to his son’s boyhood: “Your life is so very different from my own. I don’t know what it means to grow up with a black president, social networks, omnipresent media and black women everywhere in their natural hair.”

As a woman who has grown up in and around the discussion and unpacking of the cultural meaning of black hair, I can’t help but think that in a year in which we watched actress Zendaya Coleman shamefully ridiculed for wearing dreadlocks to the Academy Awards or Hunger Games actress Amandla Stenberg criticised for defending the history of cornrows, the most progressive thing we can do would be to stop politicising it all.

I’m an American who lives in London. Many of my friends on both sides of the Atlantic are women, and many of them are black, and many of them wear their hair in its natural state. But I can’t say that their decisions to do so are the same as each others’, or the same as those of the women who rejected the pressing comb in past decades. It’s not always a reaction against anything, but rather an act of self-care and joy. The millions of natural hair blogs, vlogs and communities that have sprung up around this idea – celebrating the sheer fun, transformative power and singular beauty of hair – prove my point.

Society evolves, and the way we fashion ourselves advances with it. When I interviewed Lineisy Montero for this newspaper after her breakout appearance in the Prada show in March, her reason for wearing her hair curly was simple: “I love it. I feel very comfortable,” she said. And, as Henson’s experience proves, sometimes it’s as simple as that.

Types of Damage to Look For After a Hail Storm

How to Strengthen Your Child’s Speech, Gross Motor, and Fine Motor Skills

Denim hair: what does it mean?
Trend for coloured hair takes its inspiration from childhood toys