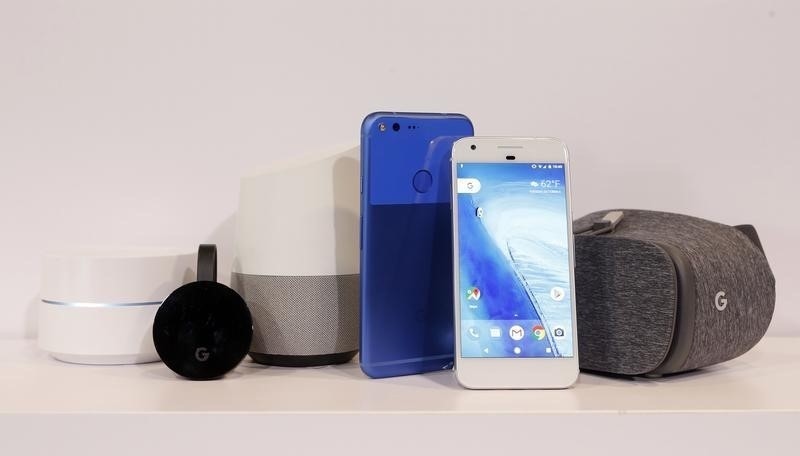 Google parent Alphabet Inc posted fourth-quarter profit below analysts’ estimates on Thursday, hurt by a higher tax rate, but analysts cheered the company’s progress in diversifying its business beyond advertising.

While advertising still accounts for the lion’s share of Google’s revenue, rising 17.4 percent to $22.4 billion (roughly Rs. 1,52,726 crores) in the quarter, Alphabet Chief Financial Officer Ruth Porat underscored that the company is broadening its business – pointing to growth in hardware, app sales and the cloud business.

The company’s other revenue, which captures such businesses, climbed 62 percent to $3.4 billion.

“We see tremendous potential ahead for these businesses, as well as in the continued development of non-advertising revenue streams for YouTube,” Porat said on a call with investors.

The results were met with a mixed reaction from Wall Street, which sent shares down 2.2 percent to $838 in extended trade after closing at $856.98 on Nasdaq. Google faced a higher tax rate of 22 percent, compared to 19 percent for the year overall, contributing to the dent in profitability.

“If you look above that, it’s business as usual,” said analyst James Wang of ARK Investment Management. “There has been no margin compression in the actual business.”

Executives suggested that they are beginning to reap the rewards of their investment in hardware. Porat spotlighted the company’s line of Nest smart home products, saying sales doubled during the key holiday period including Black Friday and Cyber Monday.

“We’re committed to this for the long term as a great way to bring a beautiful, seamless Google experience to people,” he said.

The company posted a stronger-than-expected 22.2 percent increase in quarterly revenue as advertisers spent more to reach an expanding user base that spends more time on smartphones and YouTube.

Research firm eMarketer has estimated that Google will capture $60.92 billion in search ad revenue this year, or 58.8 percent of the search ad market worldwide.

Paid clicks, or clicks on Google ads, rose 36 percent, compared with a 33 percent increase in the third quarter. Paid clicks are those ads on which an advertiser pays only if a user clicks on them.

Analysts on average had expected a rise of 26.9 percent, according to FactSet StreetAccount.

Cost-per-click dropped 9 percent, a slide that has continued as Google sells more mobile ads, which command lower prices. However, the shift is not necessarily alarming as it suggests Google is selling more ads on YouTube, which are seen as a key growth driver, Rice said.

Alphabet’s Other Bets revenue increased to $262 million from $150 million a year earlier, while the operating loss of $1.09 billion narrowed from $1.21 billion.

Verily Life Sciences, one such bet, announced Thursday that Singapore-based investment company Temasek had invested $800 million for a minority stake in the company. The investment reflects Alphabet’s greater fiscal discipline under Porat and suggests a potential new model for the other bets, said analyst Jan Dawson of Jackdaw Research.

“Getting external investors involved helps spread that risk out and reduces Google’s exposure,” he said. “It also allows some things to move faster than they would if it were just Google’s cash backing them.”

Excluding items, the company earned $9.36 per share, below the average estimate of $9.64 per share, according to Thomson Reuters.

The company’s consolidated revenue rose to $26.06 billion above the average estimate of $25.26 billion.